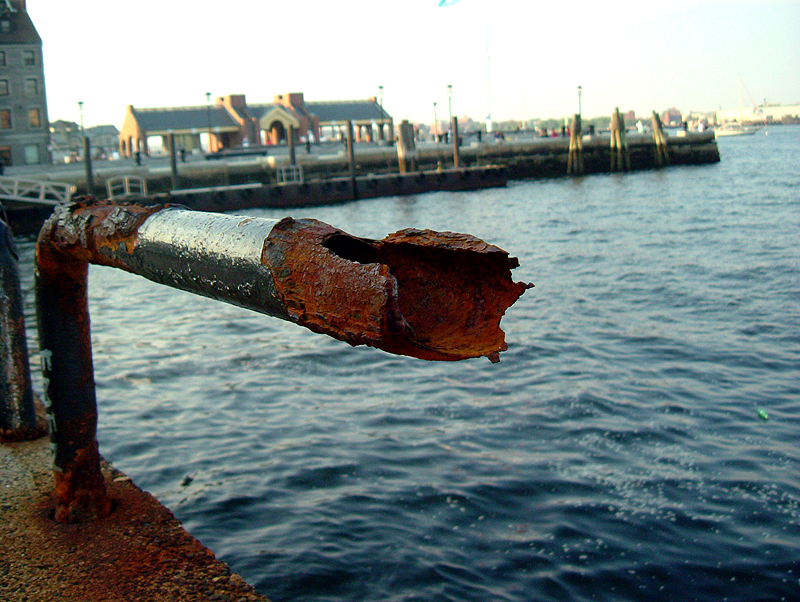 I recently put on my detective hat and tracked down a bug in network error recovery in a popular PostgreSQL library. Below, we'll walk through the process of bugfinding and iteratively making the feedback loop smaller and smaller. In order to find and fix the bug I

In our sandbox environment at Blend, there were some reports of "broken pipe" errors showing up a few hundred times per day. Although the error rate for this particular error was essentially zero, I was worried this may be an issue with AWS RDS that may get worse, so I devoted a half day1 to track it down. 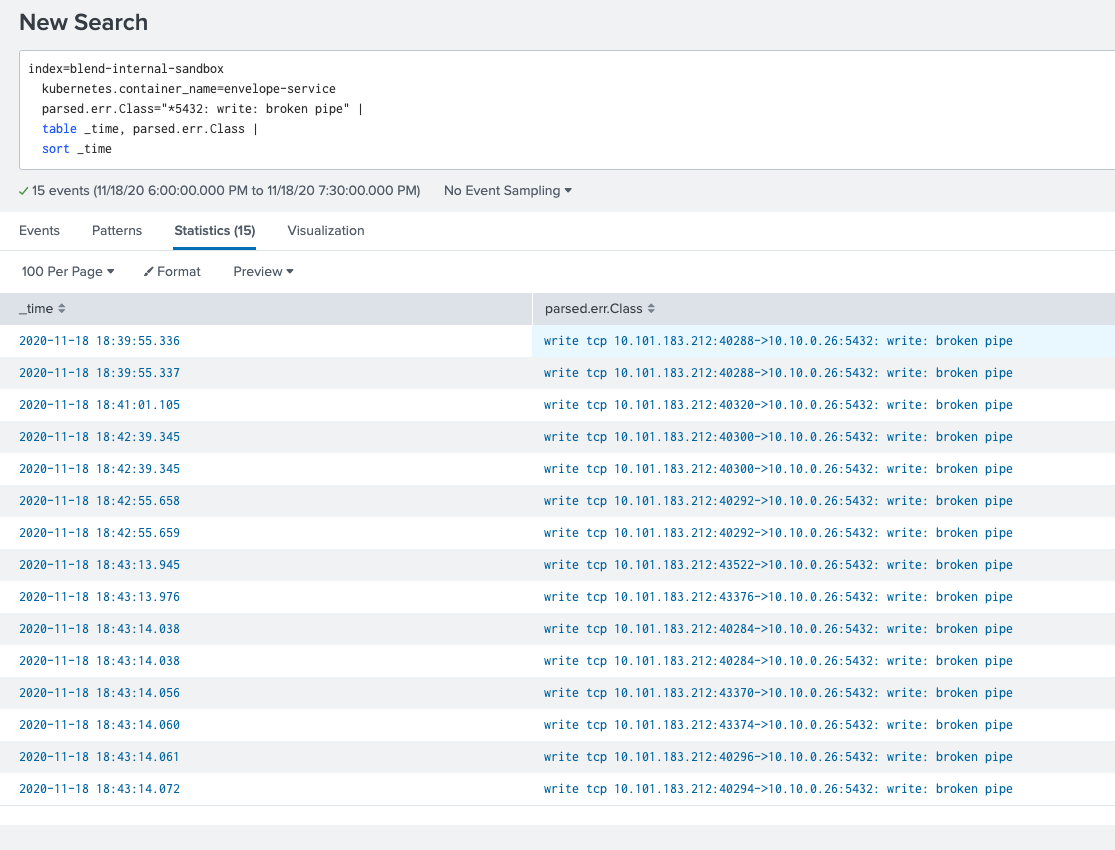 Since in sandbox, these services are often completely idle — essentially all activity is due to end-to-end tests (E2Es) that trigger as part of continuous deployment for related services. These broken pipe errors appeared to occur when the services were attempting database queries after long periods of inactivity. This was a hint that the errors were caused by failure to gracefully manage idle connections.

Confirming a Root Cause

In order to pinpoint the exact cause of the failure I decided to set up packet capture for one of the offending services. Rather than trying to find errors across multiple pods, the first thing I did was scale the microservice down to one pod, being sure to remove the autoscaler in the process:

From there, I pointed ksniff — a kubectl plugin — at the pod and waited until an error occurred2:

I captured packets in a ninety minute window and the error log lines started showing up around forty minutes in, from 18:39:55 to 18:43:14 UTC. In the fifteen log lines above, there are eleven unique client ports — 40288, 40320, etc. — each corresponding to a socket from a Go database/sql connection pool. Viewing the packet capture we see the AWS RDS instance sent out RST (reset) packets a few minutes before the broken pipe errors showed up. All eleven of the sockets received an RST around 18:27:09 UTC:

This confirmed the suspicion that the sockets had "gone bad" and that the broken pipe errors occurred on first usage after an extended idle period.

Who Is at Fault

A bit more about why the sockets had "gone bad". I was initially unhappy that AWS RDS had sent RST packets, essentially hanging up the phone abruptly as opposed to saying goodbye with a FIN packet to cleanly close the connection. However it appears that a minute before the RST packets arrived (around 18:26:09 UTC), the AWS RDS instance attempted to send FIN packets to each of the idle sockets. However, the client responded with an RST from a different port in all cases (instead of handling the FIN by responding with a FIN / ACK): 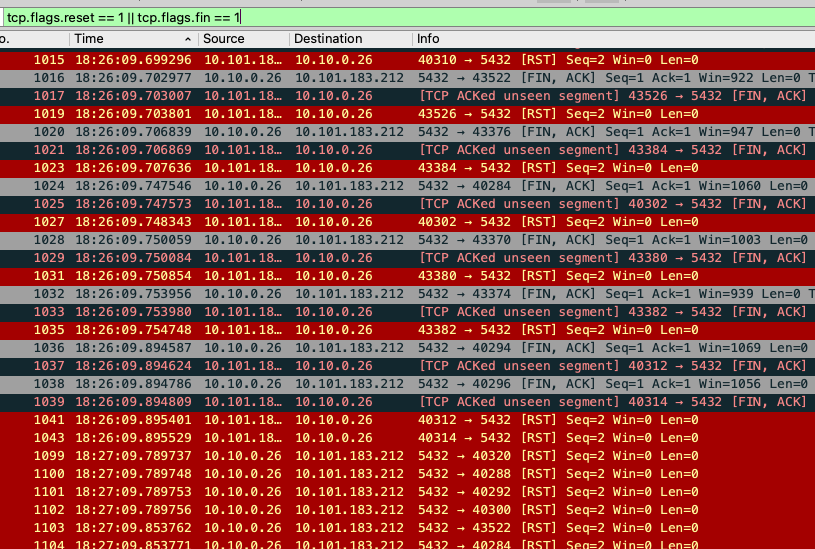 This may very well be another bug in the lib/pq Go library, but that is a story for another day. I think it's more likely that this is a bug caused by the fact that Istio is managing networking in the pod via iptables and there is some kind of bungled handoff happening. For example we can see that port 40320 receives a FIN and then an RST but never sends back a FIN or RST:

With reasonably high certainty that the issue was caused by first-use-after-RST, it was time to massively decrease the size of the feedback loop. I needed to control three moving pieces here to be able to reproduce the conditions

In this case we don't literally need to control the network, but we want something programmable (e.g. a proxy) so that we can send an RST without having to reach into the blackbox of the postgres binary running in a Docker container.

First we run the database:

Next, using the github.com/lib/pq library, the broken-pipe.go script creates a single connection and then executes the statement SELECT 1 before and after a sleep statement. During the sleep, we expect an RST packet to be sent. In order to ensure with a high level of certainty that the RST packet has arrived, after the first statement the script indicates it has gone idle by writing to a (shared) state file and then sleeps for a second before executing the second statement. If we use the script to directly query postgres (i.e. without a proxy):

The last bit here is the "network". The rst-proxy.go script runs a TCP proxy that usually shuttles packets between the Go client and the postgres server. However, it polls the (shared) state file and once the client has gone IDLE it closes the connection. In normal circumstances, closing the connection would still not result in an RST, the kernel3 will send a FIN to gracefully close the connection. To modify this behavior we must set the SO_LINGER socket option:

When running the rst-proxy.go script and pointing our client at the proxy port, we can reproduce the error 100% of the time:

Once I had a very small loop for reproducing the error4 it was time to find the source of the bug. I initially assumed that database/sql in Go would "actively" manage the connection pool and remove a connection the moment an RST was received. The fact that the error can be reproduced 100% of the time puts that theory to rest. I also did a sanity check with the pgx library and verified it does not have this bug, meaning that this was a bug in lib/pq. (Despite its popularity and longevity, lib/pq is in maintenance mode and the maintainers recommend using pgx.)

I wasn't sure where to look to find the bug and had zero familiarity with the lib/pq codebase. So, in order zoom in on the issue I created a custom postgres-wrapped database driver via the super helpful github.com/ngrok/sqlmw library. In Go, a database driver is composed of types that satisfy a small set of interfaces from database/sql and database/sql/driver. For example the driver itself satisfies driver.Driver and must have an Open() method that returns a connection satisfying driver.Conn. Using ngrok/sqlmw, I was able to log every invocation of a method from one of these interfaces, for example:

Once I was able to determine that ExecContext() was the source of the write: broken pipe, I started to modify ${GOPATH}/src/github.com/lib/pq until I narrowed down the source:

I must say I was surprised by this, using panic() / recover() essentially amounts to try / except in other languages, a pattern that is not very common in Go5.

Luckily I was able to submit a fix (lib/pq#1013) that was small and easy to reason about. This likely contributed to the quick review and merge from the lib/pq maintainers. The fix was to explicitly mark the error as safe to retry when we know zero bytes were written and then to return the driver.ErrBadConn sentinel to signal to database/sql that the connection should be removed from the pool:

I certainly didn't come up with this idea on my own. I previously mentioned that pgx did not have the same bug. When vetting pgx, I dug through the source in the same way that I did with lib/pq and found that PgConn.Exec() marks an error as safe when exactly zero bytes are written and the high-level driver connection returns the sentinel driver.ErrBadConn if an error is safe to retry.

In some sense, we should've never been down this road because lib/pq is in maintenance mode. However, the real story here is about starting from a wide open view of microservice logs and narrowing down all the way to a line of library code. Additionally, the story may not be over if the RST packets are caused by a connection handoff issue with Istio.

So what should a reader take away from this long and winding road to a bugfix?