This is the mostly code second half of a two part post that delivers on a promise of meaningful uses of some theory I overviewed in my last set of posts.If you see words like topograph, river, and base and you aren't sure what I mean, you may want to read that last set of posts.

In the first half of this post, I outlined a solution to Project Euler problem 137 and will continue with the solution here. Stop reading now if you don't want to be spoiled. There was no code in the first post, so this post will be mostly code, providing a pretty useful abstraction for dealing with binary quadratic forms.

In the very specific solution, I was able to use one picture to completely classify all integer solutions to the equation 5x2−y2=4 due to some dumb luck. In the solution, we were able to use

Since every edge protruding from the river on the positive side has a value of 4 on a side...by the climbing lemma, we know all values above those on the river have value greater than 4

but this is no help when trying to find solutions to 5x2−y2=9, for example.

To answer the question 5x2−y2=9, we'll use the same pretty picture, but emphasize different parts of it. As you can see below, to classify all the values, we only need to travel from the initial base 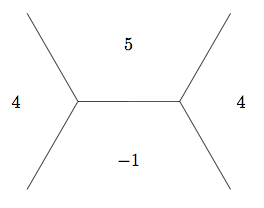 along the river until we arrive at an identical base as the blue circles indicate below: 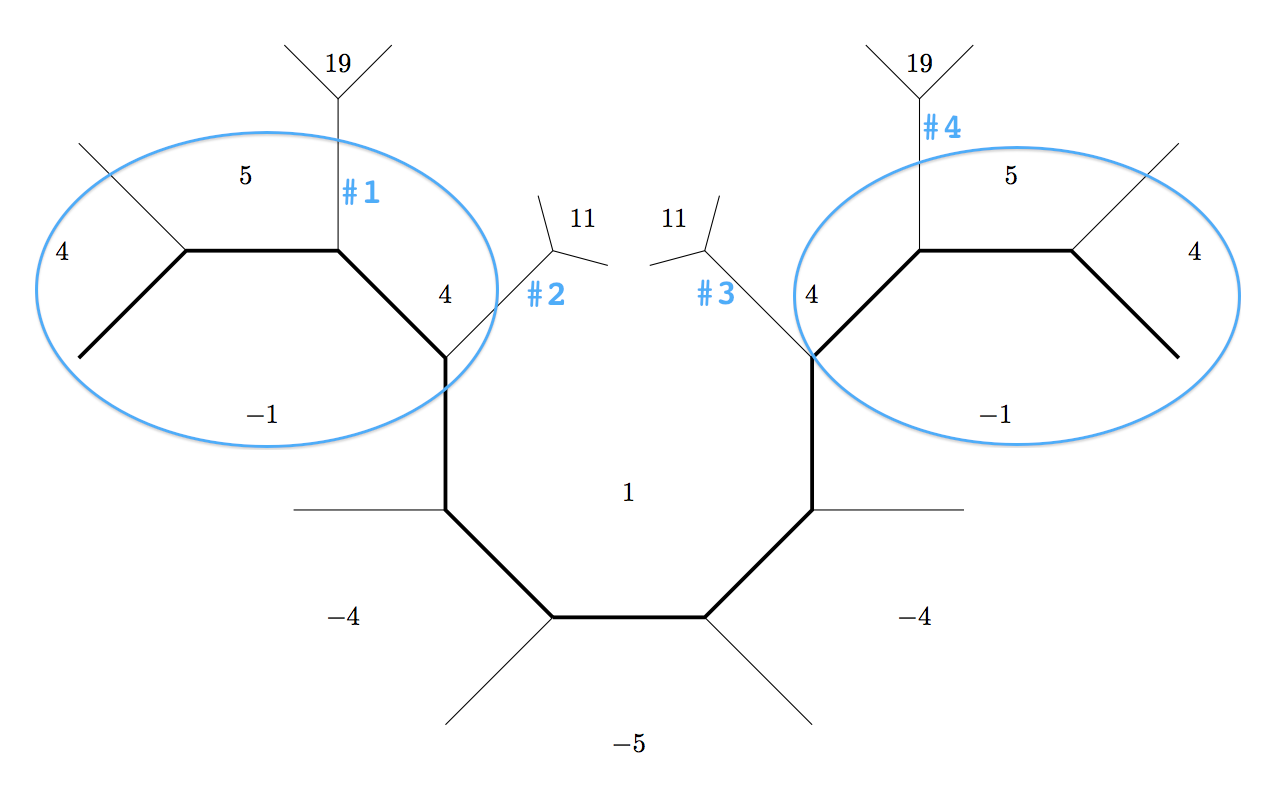 As noted above,for problem 137, we luckily were concerned about finding values 4 or 1, and the climbing lemma saved us from leaving the river. However, as I've noted above with #1, #2, #3, and #4, there are four tributaries coming from the river where we can consider larger values. Using the Arithmetic Progression Rule, we find values 19, 11, 11, and 19 as the first set of values above the river. From this point, we can stop checking for solutions to f(x,y)=9 since the climbing lemma says all further values above the tributaries will be 11 or greater. Thus, the only solutions come via scaling solutions of f(x,y)=1 by a factor of 3 (using homogeneity of a quadratic form).

Now for the (Python) code.

First, the data structure will be representative of a base along the river, but will also include the previous and next faces (on the shared superbases) and so we'll call it a juncture (my term, not Conway's). Each face in a juncture needs to be represented by both the pair (x,y) and the value that f takes on this face. For our sanity, we organize a juncture as a tuple (B,P,N,F), (in that order) 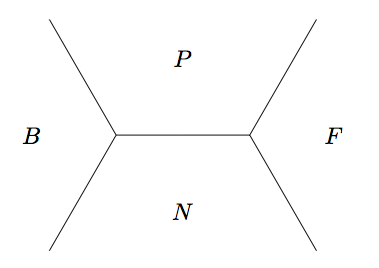 where P and N form a base straddling the river, with P taking the positive value and N negative, as well as B the face "back" according to our orientation and F the face "forward". Note, depending on the value of the form at F, the river may "turn left" or "turn right" at the superbase formed by P, N and F.

To move "along the river until we arrive at an identical base", we need a way to move "forward" (according to our imposed orientation) to the next juncture on the river. Moving along the river, we'll often come to superbases (B,N,P) and need to calculate the forward face F. To calculate F, assume we have already written a plus function that determines the vector at F by adding the vectors from P and N and determines the value at F by using the arithmetic progression rule with the values at all three faces in the superbase. Using this helper function, we can define a way to get the next juncture by turning left or right:

Next, to know when to stop crawling on the river, we need to know when we have returned to an identical juncture, so we define:

Using these functions, we can first find the recurrence that will take us from a base of solutions to all solutions and second, keep track of the positive faces on the river to generalize the solution of f(x,y)=z. For both of these problems, we impose a simplification for the sake of illustration. We will only be considering quadratic forms

where a>0, b<0 and ∣∣​ba​∣∣​​ is not rational. This guarantees the existence of a river. We will pass such forms as an argument form=(a, b) to our functions. We start our river at the juncture defined by the trivial base (1,0),(0,1) 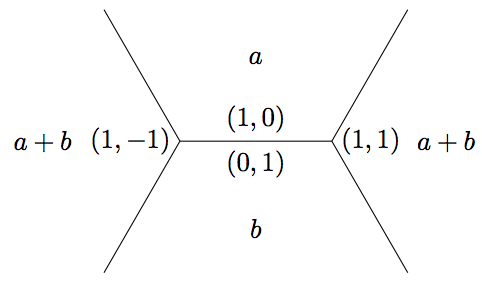 and crawl the river using the functions defined above.

To find the recurrence, we need just walk along the river until we get an identical juncture where the trivial base is replaced by the base (p,q),(r,s). Using the same terminology as in part one, let the base vectors define a sequence {(uk​,vk​)}k≥0​ with u0​=(1,0) andv0​=(0,1), then we have a recurrence

For solving f(x,y)=z, (z>0) we need to consider all the positive tributaries coming out of the river and let them grow and grow until the climbing lemma tells us we no longer need to consider values larger than z. In order to consider tributaries, we describe a new kind of juncture. Instead of having a positive/negative base in the center of the juncture, we have two consecutive faces from the positive side

and have the negative from across the river as the "back" face. With this definition, we first write a function to return all tributaries:

For each tributary, we can climb up away from the river until our values are too large. So we write a helper function to take a given tributary and a max value and recursively "climb" the topograph until we exceed the value. This function will naively return all possible faces (value and vector) without checking the actual values.

Finally, we can combine these two helper functions into a function which will find all solutions to f(x,y)=z above the river. We may have a pair (or pairs) (x,y) on the topograph where f(x,y)=k2z​ for some integer k; if so, this gives rise to a solution (kx,ky) which we'll be sure to account for in our function.

Combining all_values_on_form with get_recurrence, we can parameterize every existing solution!

As far as Project Euler is concerned, in addition to Problem 137, I was able to write lightning fast solutions to Problem 66, Problem 94, Problem 100, Problem 138 and Problem140 using tools based on the above — a general purpose library for solving binary quadratic forms over integers!