First, let me say I'm not posting this to shame any company or language community. Getting to the scale Twitter reached in a short amount of time can quickly make past engineering decisions look foolish in hindsight. But almost always they are decisions made in good faith with the current information.

Over the past 6 months, I've been trying my hardest to find an old talk I had watched about a bug at Twitter that was responsible for the fail whale. I could not find the talk for all I tried. When trying to find the talk, I was searching for "memory leak" caused by "Ruby stack traces". 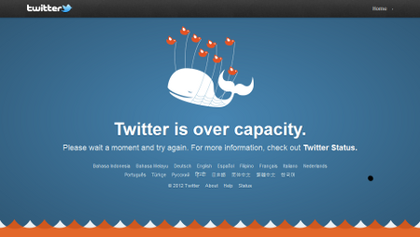 I couldn't find the talk for several reasons

When I finally found the talk, I was so excited. In order to make my future Google searches actually turn up results I wanted to write this blog post. Also, to make the searches a little more useful, please find the transcript starting at the 26:30 mark2:

If you think Ruby's inefficient today ... Twitter was a big customer of ours and in 2007 I went into Twitter because – I feel like I'm the internet historian here – back in the day there was this thing called the fail whale on Twitter. Do you remember the fail whale? OK right.

So Twitter would constantly keel over, you'd get like this whale that was indicating that things were awful and it was threatening the company. People wanted to not use Twitter as a result of this. Little did they know that there would be lots of other reasons to not use Twitter in the future but this is back when the actual the reliability of the thing was the biggest problem not like you know the Pepes or whatever.

So we went into Twitter to try to help them understand what was going on and using dtrace to understand where it was spending time. I remember they were spending 460 milliseconds of compute for a request.

Bryan Cantrill "Do you mean microseconds?"

Bryan Cantrill "Are you sure that's right, that you're spending ... For one request? One request would spend 460 milliseconds? Are you sure ...?"

Why are they doing this? Because they are deep deep deep in their Rails app and it was thought that to actually iterate over all the elements of an array from zero to the length the array – that's way too pedestrian, that's like repeating yourself or whatever. That's not DRY or whatever I don't even know what the Dogma was at the time. The "right" way to do this is to just blast through the array until you fall off the end and get an exception thrown at you. Exactly, you're like (brakes screeching sound) well you know it was ... anyway I don't know what to say about it.

So what would happen is, it would go flying off the end of this array. It's like a four element array and it's hitting the fifth element and of course it's an exception and exceptions are really (should be) exceptional and when that exception is generated what Ruby would do is like "all right I now need to get a full stack back trace so you've got some hope in hell of figuring out where this random exception is" because the alternative is much worse. The alternative is like "something somewhere in there died and I got no idea where but we're now dead" so you don't want that, right? You want to have a stack backtrace.

So it would walk up whatever it was, 434 stack frames and for each stack frame – and this is where you get to the point where it's like Ruby could be a little bit more efficient – for each stack frame it's looking up this symbol (and this kind of very inefficient mechanism for looking up a symbol) it would generate this huge string buffer, this 16K string buffer and it would: "alright time to get this ocean liner upstairs". It would kick that up to literally the caller of this thing "oh I got it that's fine I'm off the end of the array, no problem. I get it. But I've done it the right way! I've done it without repeating myself or whatever." (Facepalm)

I've really enjoyed listening to both Bryan Cantrill and Gary Bernhardt talk about software and I highly recommend watching many of their great talks. Also it was super cool that when I finally tweeted about my search for this old Twitter bug both Gary and Bryan interacted on Twitter!